It is not a holiday suites. 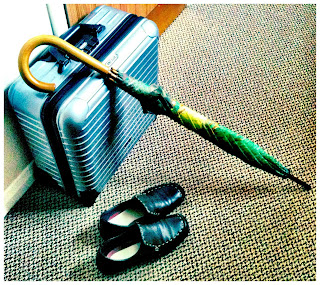 Following the Umeboshi story, I am going to talk about rice.

When I'm going to buy rice, I usually take suitcase since I usually buy a packet of 10kg of rice and it is quite heavy to carry back hanging from your arm.

Japanese rice in UK are usually imported from California or very few of them are from Italy. They are not something you can buy at any supermarket and you really have to go to Oriental food store so I prefer buying a big packet rather than getting them every couple of days.

Japanese students in UK, who automatically believe that buying Japanese rice in UK is totally decadent, tend to buy pudding rice as substitute. I don't know where it has been started but by word of mouth pudding rice is the closest to Japanese rice among those you can buy in a normal supermarket.

Now I have to clarify to all Japanese students in UK.

So DO NOT buy pudding rice unless you are making rice-pudding, which I think generally is disgusting, too.
Posted by KRess Europe
（クレス・ヨーロッパ） at 16:19 No comments: 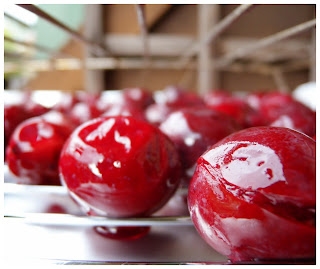 My love for Japanese food is sometimes too much and quite often too overwhelming.

Quite a many years, I made Japanese rice everyday with my Japanese rice cooker and ate it at least twice a day with a couple of 'Umeboshis'.

Umeboshi is authentic Japanese pickled plums. I was quite fussy about the quality so I always calculate the number of Umeboshi left in the fridge and try not to eat them all till next visit to Japan.

One day, a friend of mine brought a bucket of damsons from their garden, so I decided to make my own Umeboshi.

It is really a painstaking job and takes several months to complete the process.

Anyway, after all sorts of hassle, here you are, Umeboshis are done!

I think I will go back to my old counting Umeboshi life, yeah, I think so.
Posted by KRess Europe
（クレス・ヨーロッパ） at 14:16 No comments: 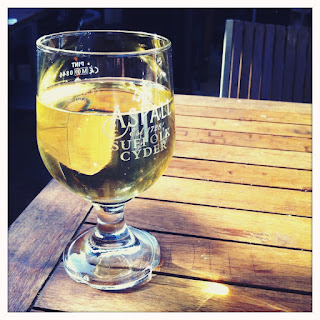 I know what cider is now but I didn't know 16 years ago.

In Japan, 'cider' is lemonade and 'lemonade' is proper lemon juice.
So I didn't dream that cider is alcoholic drink.

Who and how people decided to call lemonade 'cider' in Japan but if you order 'cider' you will get sweetened sparkling water in Japan.

But at the same time, I wonder why English people decided to call the sweetened sparkling water 'lemonade'? It tastes million miles away from 'Lemon'.

OK, then you may ask what we call cider in Japan.

Could it be any clearer? Perfect!
Posted by KRess Europe
（クレス・ヨーロッパ） at 16:51 No comments: 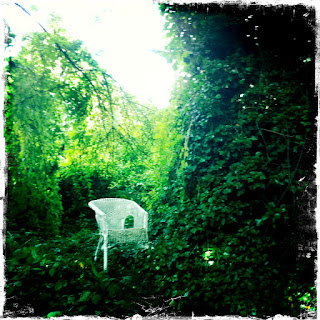 Recently, I had a friend from Paris visiting me.

He loves taking pictures around and he wanted visit somewhere not too touristic. So I took him around the places I love.

First of all, we walked through 2 woods near our flat then went into a path, which used to be used as a railway.

It was incredibly nice day and in summer time, the path is generally covered with full of green.

So it was a bit of surprise to find this chair all in sudden.

But in any case, it was brilliant contrast of this white in the deep green.

Hope the chair is still there, even if it is totally meaningless.
Posted by KRess Europe
（クレス・ヨーロッパ） at 03:17 2 comments:

I've lived in London for nearly 16 years and it is probably the very first water melon I have bought in UK.

How lucky! I found a little heart in it!

It may be weird to the Westerners but Japanese people actually put salt on water melon as it makes the natural sweetness stand out better.

Does North really have to be the top? 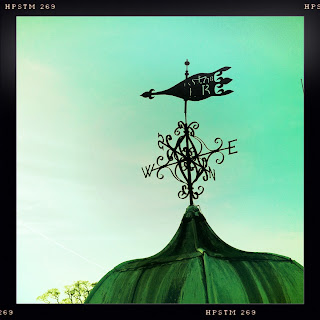 When I started living in London, I really didn't have any idea why you need to know which direction is the North, South etc., why tube stations have to indicate 'Southbound', 'Northbound' instead of name of the destination.

In Japan, we rarely use North or South to indicate directions to get somewhere. Usually it should be which station, and when you come out from the station, right or left and 3rd corner at convenient store right and so on. You really don't have to know where is the North.

In Japan even maps are not necessarily pointing the North. If you see a map on a wall around a station, for example, it is most likely pointing the direction you stand rather than North, which is very confusing for non-Japanese.

So, it is not only me but quite often, Japanese people do turn around a map to point the direction you stand (otherwise you have to turn to face the North all the time). And this is one of those things Westerners do not understand at all!

When I get lost somewhere in UK with map in my hand and if I ask English people for direction, then they always say:

You got lost because you turn the map in that strange way!

Not really! OK, I got lost but it is not because I turn the map in 'your' strange way. It is perfectly reasonable for me...
Posted by KRess Europe
（クレス・ヨーロッパ） at 14:38 No comments: